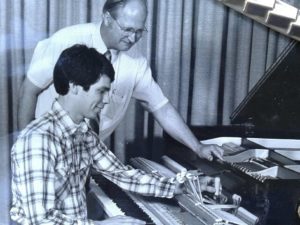 Dan Lundell was born into a singing, playing musical family. His first direct exposure to piano service was in his neighbor’s garage in Modesto, California in 1974, when at 16 years old, he helped recondition old pianos. There was a high demand for uprights in the 1970’s.

Dan’s real career breakthrough came at 20, when he asked Harold Erwin, a Yamaha piano dealer in Modesto, if he could work a trial period for free, just to get some piano tuning experience. Harold was a graduate of the William Braid White School of Piano Technology, in Chicago.

In 1982, Lundell passed the test to become a registered member of the Piano Technician’s Guild.

In 1981, he met Nanette, a musician, whom he married two years later. They moved to Alaska in 1983 so that Dan could work for Alaska Piano & Organ. The next year, they moved back to California where they remained until 1989 when they decided to make Alaska their permanent home.

Dan Lundell repaired and tuned pianos for Anchorage’s Keyboards West, then Washburn, Inc., and now Classic Pianos. For 15 years, he tuned all pianos at the Alaska Center for the Performing Arts, sharing responsibilities with Kurt Ford.

Along the way, Dan and Nanette had seven children who, with their K-12 experiences and this community, were well-prepared for life.

Among Dan’s local heroes are the late Bettie MacDonald, the former choir director at Bartlett High School; the late Janet Stotts, who directed the Alaska Children’s Choir; Renee C. Henderson, retired, who led the Kenai Central Choirs for 40 years; violinist Paul Rosenthal, founder of the Sitka Summer Music Festival; and the late Al Seitz, one of Anchorage’s first and most noted piano tuners.

Excerpted from an article by Frank Baker, of echoak.com, February 2, 2017